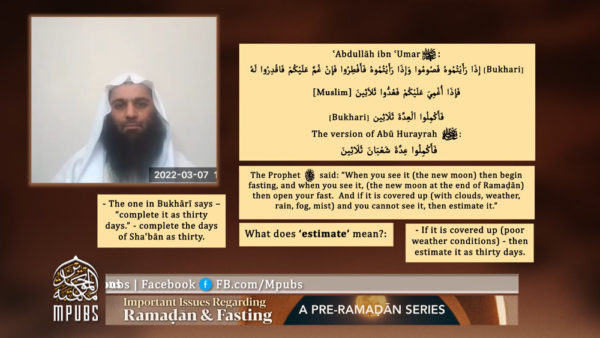 Muwahhideen Publication is pleased to announce a pre-Ramaḍān video series of lessons in preparation for the blessed month.  This series of lessons aims to instruct the Muslims on the important issues regarding Ramaḍān and fasting and make it easily applicable for those of all ages and levels. Abū Muʿādh Taqwīm will be teaching from the book Bulūgh al-Marām with the explanation of Shaykh Fawzān. Below is a workbook that can be downloaded and printed so that all attendees can work through the lessons with all the evidences.

This weekly video class will be via LIVE Video stream In Shāʾ Allāh.

So we invite our brothers and sisters to join us in this simplified this knowledge-based weekly class.

We ask Allāh to allow us to benefit and to implement the best of what we learn.

Tune in to the LIVE Video Stream via:

Review the previous lessons below:

Video Lecture: Islām Is The Source of Our Happiness and Contentment by Muṣṭafā George

Video Podcast: Every Soul Shall Taste Death – How Do You Want To Depart? by Shaykh Ḥasan Ṣomālī

⛔️The Attacks on The Scholars Are From The Hallmarks of Haddādiyyah: A Defense of Shaykh ʿAbdullah Bukhārī @dr_albukhary 👤by Abū Afnān Muḥammad 📺https://t.co/HybvrKMOS2
h J R